Doubling down on our progressive web app

Deloitte Digital remains committed to progressive web apps and offers a point of view on the paradigm’s latest developments.

A year into the Deloitte Trends app, the organization’s first progressive web app (PWA), it was decision time: stay the course or pivot?

The app, which launched in tandem with Deloitte’s 2018 Global Human Capital Trends report, was successful in its first year but faded after a frenzied launch. Now Tech Trends had come aboard as a second tenant, prompting the name change to Deloitte Trends app and providing impetus to recalibrate the tactics to attract and retain users.

There was also a platform debate: whether to persist with the progressive web app or shift to native apps, likely through a hybrid framework that leveraged the existing web code base. Having dealt with growing pains in year one, did we feel that PWA was still the best way to meet our goals?

With the support of business sponsors from Deloitte’s Human Capital practice and the Office of the CTO, we ultimately resolved to double down on the PWA platform. The decision came after revisiting the initial technology selection criteria and reflecting on recent advances in PWA support. Though the PWA movement has demonstrated to be a gentle current rather than a tidal wave, we ultimately believe—as many others do—that PWA’s have great potential.

To increase the app’s stickiness, we needed an intuitive onboarding module to introduce Deloitte Trends and explain what makes it so special. For instance, users would need a heads-up about adding a home screen shortcut.

We settled on a carousel, in UX parlance, that is elegant yet simple. The most interesting aspect is a customized notification prompt embedded in the user interface, instead of the default instant popup with boilerplate text. The goal was to convince the user of value prior to asking them to subscribe and to pair the eventual question with a benefit statement. 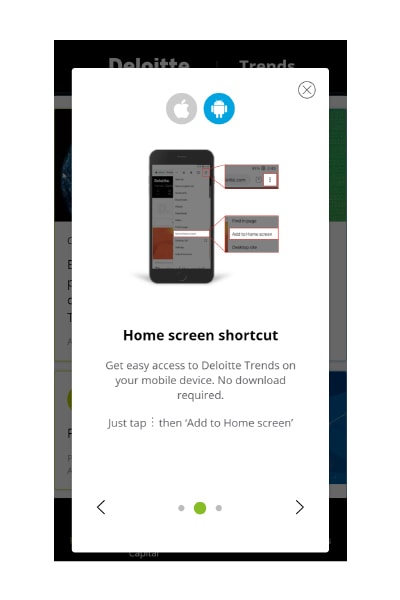 Notification opt-in is typically a one-and-done affair, but foregoing the usual prompt meant we could remind non-subscribers later. If they continued to visit the site, we reasoned, they might be open to reconsidering. Given that push notifications are a lynchpin of a modern web app’s engagement strategy, this seemed like engineering hours well spent.

The results? So far, opt-ins are lower initially—likely due to users exiting the onboarding carousel before the last slide—but appear to be creeping up over time. We will eventually be able to provide a data-driven analysis of the strategy citing opt-in rates before and after the release.

Although Deloitte Trends v1 had dynamic content, the design heavily promoted the most recent annual research, which could be up to almost a year old. Elsewhere in the app, fresh content existed (for instance, blog posts expounding on the annual research) but users struggled to discover it.

To remedy this, while at the same time giving the business more control over which content to feature, we turned the home screen into a content feed with a mix of curation and automation. We hoped the user would enjoy the whimsical browsing experience and find something that captured their attention. The final order of business was to provide the efficient offline experience that users expect from native apps. Taking inspiration from leading news apps, we wanted users to be able to read articles while offline. Achieving this required the app to download content in the background on the user’s behalf, then recall it from memory on demand. This capability is a powerful illustration of the convergence between progressive web and native technologies.

To make the functionality perceivable and user-friendly, we set up non-intrusive alerts to the effect of “Enabling offline access…” and “Offline access enabled!” and created offline states for rich media that required an internet connection (such as streaming video and interactive charts), so users wouldn’t think anything was broken.

In most software projects, engineering hours are the scarcest resource. If we had more time, we would have liked to capture analytics about offline sessions and sessions launched from the home screen shortcut. These events are only trackable with custom code. Currently we lack hard data with which to validate our hypotheses about these features.

In addition, hindsight has made us aware of states that could behave more gracefully. For instance, if the user goes offline, they might see a message reading, “You are offline. Some functionality may not be available.” 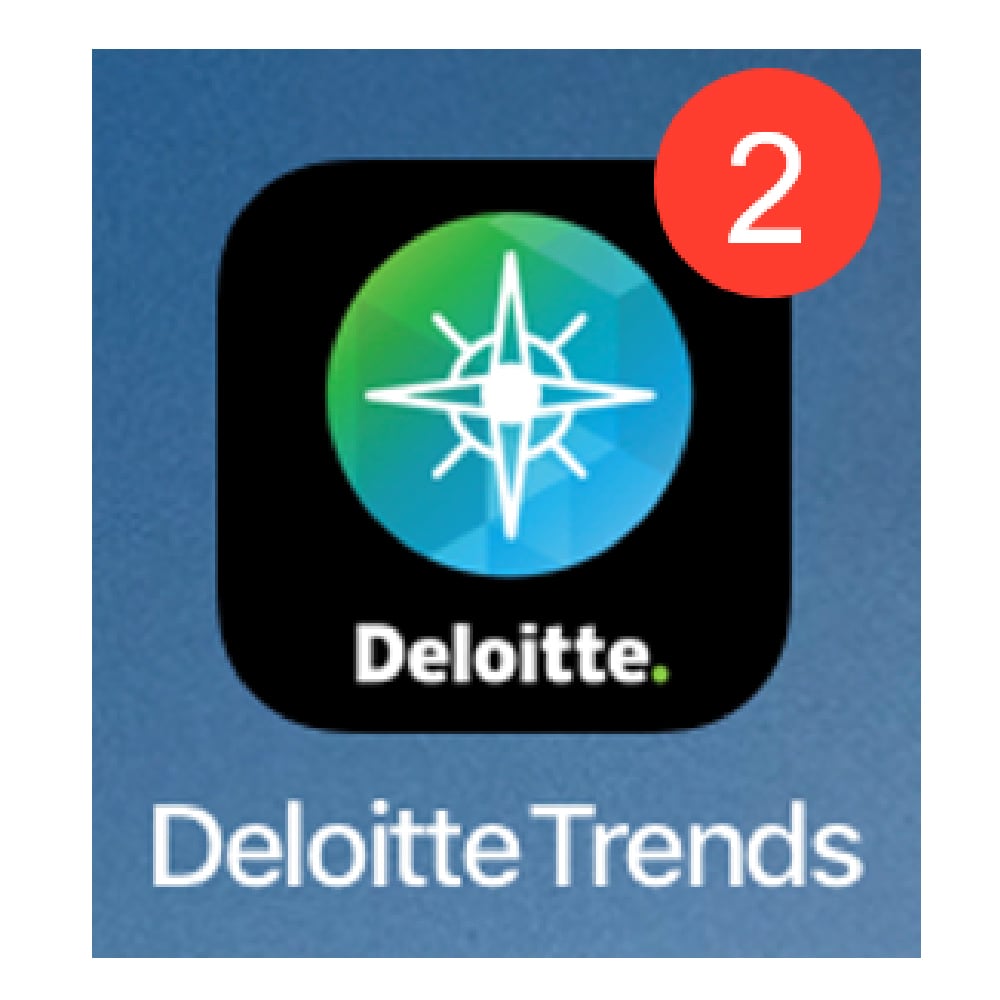 The future is exciting for PWAs. Browsers are beginning to support badging for installed web apps (i.e., a counter superimposed on the corner of the app icon), yet another feature that used to be the exclusive purview of native apps. This is exciting for Deloitte Trends as a thoughtware product with frequent new content.

Eventually, we hope all browsers will support adding a home screen shortcut programmatically through an API. We will have to revamp the Deloitte Trends onboarding module yet again should that materialize, but such is the nature of creative destruction.

Andrew Pollen, manager, Deloitte Consulting LLP, is an engagement manager in Deloitte Digital’s Seattle studio. He works with engineering and creative teams to build custom applications for Deloitte and its clients. He is currently on loan to Deloitte Spain.

The author would like to acknowledge Chaitalee Zade, Matt Cairns, and the Singapore Future of Work COE for their contribution to the Deloitte Trends project.